The Treaty of Sugauli

Signed on 2 December 1815 and ratified by 4 March 1816, The Treaty of Sugauli, also known as the Sugauli Sandhi, was the treaty signed between the East India Company and the then king of Nepal, King Girvan Yuddha Bikram Shah after the Anglo-Nepalese War in the years 1814-1816. Raj Guru Gajaraj Mishra aided by Chandra Shekhar Upadhayaya was the signatory for Nepal while Lt. Col. Paris Bradshaw was the signatory for the Company. The treaty got its name as Sugauli sandhi as it was signed in the place called Sugauli. 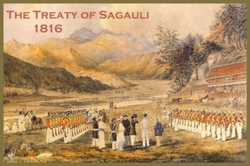 The treaty was signed as the mutual understanding between the two parties on certain issues like territorial concessions in which parts of Nepal will be given to the British India, British embassy would be established in Kathmandu as a British representative and also, Britain would be allowed to recruit Gurkhas for military service. After the treaty, Nepal also lost the right to deploy any American or European employees in its service unlike earlier when several French commanders had been deployed to train the Nepali army. The treaty caused the loss of about one-third of Nepalese territory including those that the Kings of Nepal had won in wars such as Sikkim in the east, Kumaon and Garhwal in the west and much of Terai in the south. However, some of the Terai lands were restored to Nepal in 1816 followed by some more in 1860 as a way to thank Nepal for helping the British suppress the Indian rebellion of 1857.

The first British representative was Edward Gardner who resided at a compound north of Kathmandu, now known as Lazimpat which houses British and Indian embassies. He was the first westerner allowed to live in Nepal (Kathmandu) in the post-Malla Era as the Gurkhas had deported the Christian missionaries after they conquered Nepal during the mid 18th century. In December 1923, the Treaty of Sugauli was superseded by ‘treaty of perpetual peace and friendship’ which upgraded the British resident to an envoy. In 1950, a separate treaty was signed with India that restored fresh relations between the two as independent countries.