The trek to the beautiful Pangboche in the Khumbu region is an exciting and one of the best ways to explore the legendary Buddhist monasteries present in these Sherpa villages lying below the highest peak of the world Mt Everest. This moderate trek takes you up to the wonderful village of Pangboche that is situated at the height of 3908m. Accompanied by the captivating views of the Himalayas, the Dudh Koshi and Bhote Koshi River valleys with the Kantega and Thamserku and the Nuptse-Lhotse Himalayas along with the Mount Everest in the background, this is one of the best trekking experiences in life that you would not want to miss.

Passing through the wonderful deep forested river valleys, small Sherpa villages and their fields with the snowcapped mountain views on the background, the trek will keep you moving forward with the wish to explore the nature and the culture of the region. 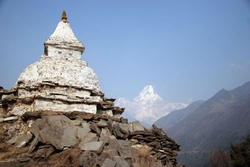 This ten days trek include six to seven hours of hike each day through the easy trail however, the altitude makes it difficult for those who are not accustomed to it. The trek begins at Lukla from where you begin your journey towards Phakding through the Dudh Koshi valley. After crossing the high suspension bridges over the river, you move towards Namche village which is the main trading center of the region. A day’s rest and walk here in the village will help you acclimatize with the new altitude before you move forward. From Namche, you move forward to Thame that lies at the altitude of 3739m passing through the Bhote Koshi valley where you could find many prayer flags and mani stones that symbolizes the Tibetan Buddhist culture of the area. You can see the views of Teng Kangpoche and Kwangde peaks and to the north lay the Nangpa La, the pass that leads to Tibet. Thame Gompa, where the Mani Rimdu festival is celebrated in spring also lay in the valley.

The trek then goes down to the Bhote Koshi valley towards the Namche but follows the trail to the wonderful Khumjung where a gompa stands proudly at the top end of the town. The trail from here leads up to a large chorten on top of a ridge (which descends from the abode of the patron god of Khumbu region which lay in the sacred mountain Khumbila, 5734m) from where the Ama Dablam Mountain looks stunning. Climbing down the trail to Dudh Koshi you cross a river and climb gradually through rhododendron forest to Phortse village. On the seventh day of your journey, you climb up to the Pangboche passing through the west side of the Imja Khola valley. The village is divided into two villages, named New Pangboche that has the tea houses and shops and Old Pangboche that houses the oldest monastery in the Khumbu region said to be founded in 1667. It is also said that this monastery houses relics that are said to be the skull and hand of a yeti.

From Pangboche, you climb down to the Imja Khola and from here, through the rhododendron forest you ascend up to the ridge where the new Tengboche monastery has been built as the old (original) one was destroyed by fire in 1989. Not only visit the monastery but you can also catch the captivating views of the numerous Himalayas from here. You descend to the bridge over the Dudh Koshi River, from Tengboche, at Phunki Tenga, the place contains the water driven prayer wheels. From here, you ascend towards Namche after you cross the bridge. Descending down through the Dudh Koshi to the village of Phakding and from here, you descend further to Lukla, from where you take a connecting flight back to Kathmandu the next day, ending your ten days long exciting trek to the Pangboche.

The best time to go on this trek is during the month of October to May.