A town located at an altitude of 2800m in Mustang district, Jomsom is also known as Dzongsam or new Fort. It is also the district headquarter because of which it is primarily an administrative and commercial center with government officials and merchants. The locals are known as Thakalis. Also a company of Nepali Army is stationed here. A trail passing through the Lower Mustang ends at the village of Kagbeni where there are plenty of prayer wheels, chortens and a Buddhist monastery. 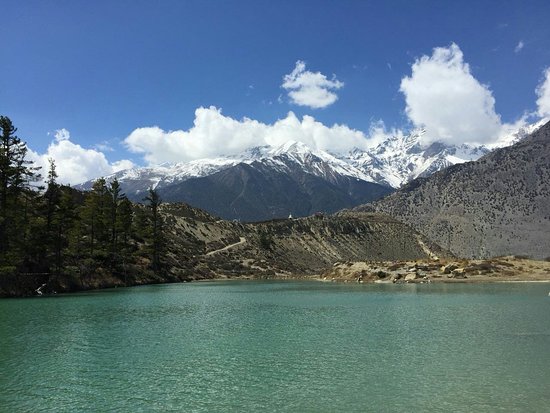 Jomsom, at the north of Pokhara, is a splendid town with spectacular view of enticing mountains and deep valleys. A wide range of people, terrain from subtropical jungle to high, dry landscape resembling Tibetan Plateau is found here. It offers some of the best and hidden restricted Himalayan areas of Nepal that only few foreigners have visited so far.

There are facilities for home-stay and also many hotels and lodges that provides accommodation for the visitors. The trek takes you to one of the most holy temples through Kali Gandaki river bed. The marvelous views of Annapurna, Dhaulagiri, Nilgiri, Himchuli, Machhapuchhre and Thorang peaks take your breath away. It takes you closer to the magnificent beauty of the rich Nepali nature as well as culture introducing you to the traditional Magar village, unique Thakali culture and the religious Hindu temple of Muktinath where 108 water spouts can be found. Also the deepest gorge on the way makes the 15 day trek, the most memorable trek of your lifetime.

The best time for the trek is the spring season when the weather is clear and bright that give clear views of the snow capped mountains. It could also be trekked during the winter, however, the weather and cold might be the problem. Thus, the trek to Jomsom takes you closer to the rich natural, religious and cultural heritage of Nepal.