Tulsi R. Gautam, also the CEO of Machhapuchechhre Bank Limited (MBL), is one of the most competitive and inspiring person in the field of banking in Nepal. One who believes that hard work and determination always pay, he opines that to run any organization smoothly, it is essential to have teamwork among the employees, employer and staffs working there. He also believes that teamwork and motivation plays key roles in the growth of any organization.

He completed his Bachelor’s in Economics as well as English Literature and has the experience of working on different banks such as Nepal Industrial Bank and Nepal SBI Bank. He also provides in-house trainings and trainings conducted by Nepal Banking Training Institution (NBTI) to his employees an if possible, sends his employees abroad for further trainings as well. 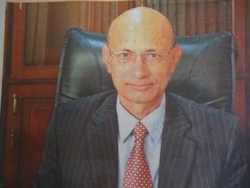 He joined Machhapuchechhre Bank just as it had merged with Standard Finance Limited. The bank was is rough path and he wishes to take it to the peak. The man with determination fulfills his duties and responsibilities effectively and believes that honesty and integrity are the most important virtues. When he had joined Nepal SBI Bank, the total loan granted was only Rs 4 billion but it had gone up to Rs 27 billion by the time he left it. Also, the bad debt was reduced to 0.5 percent from more than ten percent, this, he considers as his greatest achievement. He has not only received achievements in his life but has also faced challenges. One of the greatest challenges of his life, according to him, was when he got appointed to set up a branch of Nepal Bank in Okhaldhunga (a place without any means of proper facilities) where it took them four days to get cash from the nearby branch of the bank and an entire month for the documents and official papers.

He is an inspiration to all the young aspiring bankers, his more than 28 years of experience in the field of banking has made him even more skilled and knowledgeable. Also an avid lover of literature, P G Woodhouse, Shakespeare and William Beckett are the authors he admires. Aiming to become the most successful CEO in the history of banking in Nepal and taking Machhapuchechhre Bank to top most level, Tulsi R Gautam also hopes to write a book someday.