The Tutor of History by Manjushree Thapa

The Tutor of History is an interesting novel by a prominent Nepali author writing in English, Manjushree Thapa which gives the reader a bittersweet reading experience. The novel is set around the context of ’90s style election campaign in Nepal with depiction of warmly alive and gossipy town in the time of election, which, at the same time, contrasts with the violent Maoist insurgency that has altered the life in the country. 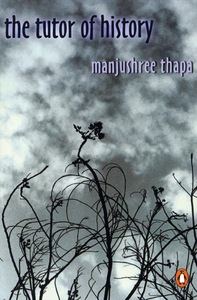 The novel is set in Khaireni Tar, an average roadside bazaar where it was common to find two different cultures intertwined with each other. In the bazaar lives a young widow Binita Dahal who runs a teashop and protects her independence with a cautious attention to propriety and she had chosen loneliness over subservience. Most of the main characters of the novel are trying not to expect much from the future, like Binita. An alcoholic chairman of the party’s district committee Giridhar Adhikari is portrayed as someone who regains his lost sense of usefulness during the campaign. The ‘tutor of history’ Rishi Parajuli comes to Khaireni Tar from Kathmandu where he finds satisfaction in being anonymous and his coincident encounter with a childhood hero has led him to an odd, deceptive mission for the sake of once purposeful ideals that are dimly remembered now.

Some of the instances and accounts in the novel, however, are questionable like the way she mentions that a person could survive for a decade by tutoring history, which seems way to unbelievable and could be seen as a symbolism rather than as truth. Another instance is making Binita’s niece Sani so illiterate at the age of 16 that she could not even differentiate Ka from Kha which although is not unheard of, is hard to relate to because of the other details provided about Sani. The Tutor of History could be considered as a perceptive and memorable portrayal of a contemporary Nepal colored by the permanent unrest of those who moved unseen through the land (Maoists) as the setting of the novel itself has turned into a page of Nepali political history.