Nepal is a beautiful country rich in natural as well as cultural heritage. Being a traditional country, there are certain rules and principles that guide the life of a Nepali. People are expected to act and behave in certain way. While you are here in Nepal, there are certain ways people expect you to behave and also, there are certain expects of Nepali life that one must know about. Here are some guidelines that a person visiting Nepal or a Nepali household for the first time should know about.

Nepali people are friendly and they like to talk once they feel comfortable around someone, so talk to them when they initiate a talk. They are usually shy people and if they initiate the talk, it means they really want to talk to you, however, public display of affection like kissing or hugging might be considered offensive. 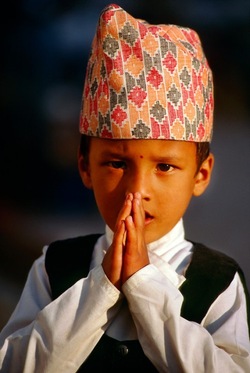 Namaskar or Namaste is the form of greeting in Nepali which means hello or goodbye depending on the situation. While doing Namaskar the hands are joined together and brought up just few inches below your chin. You can accept handshake offered by both male and female, however, offering your hand to the female first might not make them very much comfortable, except with some females in urban areas. So, it is better to opt for Namaste rather than handshake.

The roads in Nepal are narrow and crowded, so the drivers are forced to blow horns which make it noisy as well. Also, the lack of proper implementation of law against littering and spitting makes the roads look dirty because of all the litter and waste people dump on the roadside. Moreover, people who don’t look like an ordinary might get a lot of looks and even constant staring in most of the places on the outskirts of the valley. Usually the kids come running and circle around the person and expect them to smile or take their pictures. It is common to see people of same sex walking together hand in hand or arms around each other as it is considered as a friendship gesture rather than the gay or lesbian concept. And sometimes, the person talking to you might tap you to get your attention as it also indicates the closeness you have with them.

People might ask you if you have had something or not. And if you do not want to eat, it is better to tell them you have already eaten. Otherwise, they would force you to eat with them. In a dining table in Nepali household, the women or the mother of the house serves the food and also eats at last. If she offers food repeatedly, it is not an offence but a way of showing care and respect. Nodding your head means ‘yes’ and shaking it from left to right means a ‘no’. Nepali people usually eat with their hands. People are expected to share their food items, especially in the villages and small towns, when people make or cultivate a new item, they share it with their neighbors before they have it themselves.

Pointing finger at people is considered bad and it is better to point your chin or else point them with your hands turned up. It is also believed that saying ‘I don’t know’ directly is rude and instead of saying that, it is better to offer some solution or ask them to look somewhere where you think they might find the answers.

Elders are not called by their names but by their titles. Your friends’ parents expect you to call them uncle and aunt rather than use their names, first or last. Even the siblings are called dada, didi, bhai, baini, etc. The younger male and married female members of the family (except daughters and son-in-law) touch the feet of the elders when they return after a long absence. Also, if your feet touch someone by mistake, you are supposed to touch their soldiers and then your forehead with your right hand.

You do not go to visit anyone in the hospital empty handed and take fruits, juice or powder mix like Horlicks, Boost, etc. and also while visiting anyone’s home, if there are any small kids, the kids expect you to bring them sweets, no matter how small it is.

Shopping usually demands bargaining in Nepal as there are no price tags in most of the products and the shopkeepers tell the price themselves and usually expects the customers to bargain.

Telling someone they have gained is usually taken as a compliment and apart from those who are too conscious and worried about being fat, people consider it good and healthy to gain weight. “Tapai ta motaunu vaecha” (you have gained weight) is a compliment in Nepal.

Usually, nothing works on time in Nepal, be it bus or government office or even restaurants. Even when you go to pay bills, as most of them could not be paid online, expect a long line. So, look ahead to things to happen later than their usual time.

Nepali people are also superstitious and there are many superstitions they believe happens if things are done in wrong ways or not in a traditional way. Women are considered impure during their monthly cycle and are not allowed to touch any family members or enter the temples. They are kept in isolation for four days and for seven days after they give birth to a baby.Nepali people do not eat beef rather consider cow to be a form of goddess Laxmi, goddess of wealth, and worship it. However, some of the ethnic communities eat he-buffalo meat.

A priest plays an important role in the life of a Nepali, from birth to death, he handles every ritual and ceremonies and usually every household have their own family priest. The lifestyle and behavior of the Nepali people is more or less guided by religion and culture. There are more than 100 ethnic groups in Nepal and in order to understand the Nepali way better, one must live together with the people and observe their tradition.