Madhu Chhetri is a rare breed veteran Nepali singer who has tried virtually all genres of music like folk, modern, bhajan and playback and successfully won the loyal fans. He released his first solo album in the later part of his forty years of musical career. Some of the songs that gave him name and fame in the Nepali music industry are Saili ra maili poila gaechan, Phulai phula matra pani and Hurile uudauna sakena.

After forty years of musical break, he came out with his first solo album in collaboration of Arun Tiwari and although he had not done any musical venture during this period, he was, directly or indirectly related and in contact with this field. He decided on doing this new venture after he met Tiwari and was impressed with his lyrical aptitude. 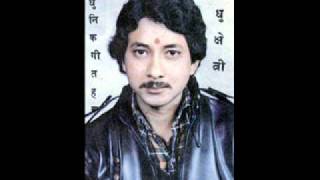 He likes to compare music with life saying that both of these needed new ideas and innovation and required you to keep moving on. It is an art, a reflection of the society it belongs to. Proud that he had been successful to win the hearts of his audience by any and every genre of music he sang, he never gave thought to how his musical career should have gone. Rather than defining himself by a particular genre of music, he likes people to know him just as a singer. Singing has been a way to get inner composure and good memories for him and he feels good about being able to create songs that would remain forever among the music lovers.

In his first solo album, solo lyrics of Arun Tiwari has been adorned by his solo vocal and composition and although it has been a long time since he had last recorded a song, the lyrics were what pulled him to do the album. He considers lyrics as female and composition as male, while defining a song and it is only after the successful blend of these two elements that you could get a perfect song. Although Madhu Chhetri appreciates many singers of the new generation, this veteran singer believes that the singer Shiva Pariyar will be creating good music for a long run.