One of the talented musician, music video director and former front man of alternative rock bank STOND AMP, Visan Yonjen has multiple identities. Although his former band disbanded, with mutual understanding, he has formed a new band, Visan N” The Groovers, with talented young musicians full of enthusiasm and passion when it comes to music.

He gained a lot of experience working with STOND AMP and he with Visan N” The Groovers, he wants to explore his musical journey. Being in rock music and having worked with a band, it wasn’t easy for him to go without one and do solo after he disbanded from his former band, so, when he came across some talented young musicians, he formed a new band. The reason that they came up with a new band was their shared passion for music and their collaboration as well as the studio sessions have been going well and he was ready to cater something new and different to his fans this time. 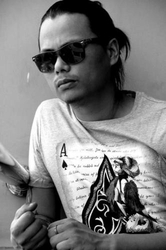 The one thing that he misses the most from his time working with his former band is playing with his main guitarist in the band. His new band was named Visan N” The Groovers as they felt very groovey while playing together for the first time and they had enjoyed it as well, thus, their experience resulted in the naming of the band.

His song Kaaran for which he had worked with Hercules Basnet and The Groovers is dedicated to all the pretty girls with lovely eyes. The song is about a playboy who ends up being a Romeo later. He was also a part of the social cause Trip to Katja where he had performed in front of the orphan kids. The moody singer Visan Yonjen is inspired by all the great musicians around the world and needs the right environment to make his music.