One of the coolest and down to earth singers of Nepal, Yogeshwor Amatya talks and sings straight from the heart. He never had any formal training regarding music and it was his late night jamming with tons of beer and his buddies that is the only thing he has to say about his musical background. One who has done diploma in Geology, Diamond grading, he says that it is music that chose him not the other way around and for him, music is a therapy and a stress buster. 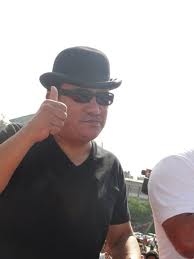 He writes poetry whenever he feels down and the composition and lyrics of his songs are taken care of by himself. Although he has never given any thought to what his music conveys, he is satisfied, happy and honored seeing others enjoying his music. He is influenced by Bacchu Kailash, Hiranya bhojpori (lekali samuha), deep Shrestha, Deepak Kharel, Om Bikram Bista, Arun Thapa, Bhakta Raj Acharya and Gopal Yongen and Beatles, Simon and Garfunkle, Bob Dylan, Eagles, Elvis, John Couger, Mellencamp, Bad Company, etc. are the international artists that he likes. He doesn’t like recording as he feels he could only give one third of his feelings while recording, however, he sings almost every other day at bars with his friends enjoying fine single malt whiskey. The singer of hit numbers like Jaba Sandhya Huncha and Laija Chari, he loves Newari and continental food and enjoys his free time with his friends over a peg of whiskey or two. He wrote one of his most popular song Jaba Sandhya Huncha while he was in boarding school in Darjeeling at the age of 13. He wrote it for a pretty girl named Sandhya studying in Loreto.

This lazy bone, as he likes to call himself, has albums like Karai Karle and Ahile Chahin Dyabya ko Aashama to his credit.