Born on 16 July 1976 in Kathmandu, Gagan Thapa is a young political leader of Nepal. He completed his SLC examinations from Siddhartha Banasthali School and did his I Sc and BA in Sociology from Tri-Chandra College. Although he dropped out of MA in Rural Development from Tribhuwan University, he later joined Master’s in Political Science. A prominent youth political leader of Nepal, he got his first taste of political activism in the year 1990 when he participated in the street protests. He wasn’t politically inclined then and although still in grade nine, he did burn an effigy of the Panchayat era as a youth vigor rather than political interest. 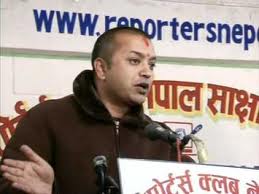 He joined the student union once he started studying at the Tri-Chandra College. It was only after he became elected as the member of Tri-Chandra Free Student Union, he decided to move along the political path. He gradually became the President of the union and he got more involved into the Central Politics of NSU. In the year 2051 BS, he was arrested for the first time in his life. After that, he had been to jail for about eight to ten times.

He was constantly seen in the street protests and has worked actively during the time of establishing Loktantra in Nepal. He is also regarded as a democratic (Loktantrik) actor in Nepal. He was deeply affected by the political talks of the people involved in the democratic movement, who used to spend nights at his home. Also, the talks of his uncle who was involved actively in the Communist Movement inspired him to participate in the Freedom Movement. He is influenced by the vision and leadership qualities of Nelson Mandela and BP Koirala.

Once the captain of college Basketball team in his college days, he is, at present, one of the most popular and influential youth political leaders in Nepal. Although he plans to acquire a PhD in Political Economy from Jawaharlal Nehru University in India, Gagan Thapa would not work to acquire it until democracy is restructured in Nepal.