Utprem Jojiju has been officially called the youngest drummer in Nepal and has been declared something of a musical prodigy as this four year old plays drum, actually creating coherent rhythms. Rather than hammering down haphazardly like most of the people expects of this four year old, Jojiju actually creates coherent rhythm and he is a potential entry into the Guinness World Records as the youngest professional drummer in the world.

For his extraordinary skills, Jojiju has gained a reputation and has been on TV, had several thousand hits on his YouTube videos and even done a number of live shows. He has also bagged a dozen of awards over time which includes an Everest World Record, a wonder Record and a Unique World Record, etc. He first appeared for a public performance in 2010 at a program titled Jojiu musical Journey to Pokhara at the age of two years. Since then, this kid born in Rani Pauwain, Pokhara has been playing consistently in functions and concerts in and outside of Pokhara. He had also performed in the presence of former Constituent Assembly Chairman Subhas Chandra Nembang and President of FNCCI, Kush Kumar Joshi at the age of two. 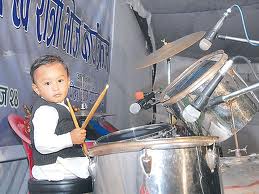 Born to a family with a musical background, he had probably inherited the talent from his father, Binit who is a professional singer and has been running Jojiju Music Centre at his home with the assistance of his wife Sanu for 10 years now. His father used to conduct rehearsals and classes in the basements of the house and the sound traveled through rooms. Whenever young Utprem heard drum, he would stop everything he was doing and listen to it intently and sometimes, also went to the basement.

[youtube]http://www.youtube.com/watch?v=5LkfeOLlh84[/youtube] Although his parents were skeptical initially and worried that his hearing might suffer, they eventually sat him down in front of drum kit at the age of one and half year old. What followed surprised them. The kid started playing drum keeping the time and everything and within few years, he has improved his skills further more. Also awarded with a scholarship at his schools, he likes painting and dancing apart from his drums and is passionate and energetic about everything he does. His entry at the Guinness World Record is under process with active participation and support of Music Nepal and Nepal Music Center (as of January, 2013).