Probably one of the oldest municipalities of Nepal, Bhadrapur town and municipality in Jhapa district in the Mechi zone is also considered as the ‘tea city’ of Nepal. Located in the south-eastern part of Nepal, it is also closer to the Nepal-India border. The Mechi River in the town separates Nepal with India, as it flows between the Galgaliya of India and Bhadrapur of Nepal.

The place, during the 18-1900s was a very prosperous city and was renowned for its rice cultivation due to its rich fertile soil. As a result, it saw the establishment of various rice mills led by the late Brahma Lal Shrestha, one of the early founders of the city, which led to the most prosperous period of Bhadrapur. It was also a very popular shopping destination for people living in the nearby areas, villages and towns as its closeness with the Indian border (then open and custom free) made larger imports and availability of various products. The Bhadrapur market was considered as one of the biggest markets in the district and was quite popular not only for the people living in the town but all over the district. Also, the open border made it easier for the people to go to India for various purposes. However, the trend has declined when it comes to shopping in Bhadrapur as the market has pretty much gone down due to heavy customs. The area that once used to be packed with people now has the wide roads with fewer people passing by. Nevertheless, on the bazaar days, the place still sees many people coming, some for shopping, some just to enjoy the place, walk around, some to visit the Mechi River and the bridge, and some coming for a movie in the cinema hall. 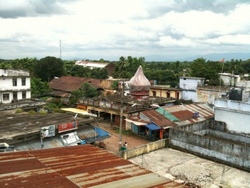 The city is fully facilitated when it comes to educational, employment, medical, entertainment, communication, recreation, transportation and other facilities. It has various important governmental and other important infrastructures like hospitals, airport, Police and Military Headquarters, Central District Office, college, etc. The airport here has regular flights to and from Kathmandu takes off. Also, a twelve hours bus ride from Kathmandu can take you to Bhadrapur and it is easily assessable from other parts of the country as well. Rather than being a destination itself, it is more like a transit point or the beginning point for tours to some of the most beautiful hill stations in Nepal as well as India.

One of the major reasons for Bhadrapur losing its economic activities and market is the construction of the East West Highway (north from Bhadrapur) that shifted the economic activities to Birtamod. However, it has been gradually transforming itself into tea hub with the establishment of several new plantation and tea factories. Also, the construction of the Mechi Bridge will help bringing back its glorious market.

Some of the places to visit while you plan your tour around Bhadrapur are the Mechi Multiple Campus, Kameshwar Complex, Buddha Mandir, Bajra Tea Garden, Mechi Bridge, Mahendra Park, Mechi Zonal Hospital, Pathibhara Hospital, etc. Also, a regional radio station broadcasts from here in the frequency 107.5 MHz, namely Nagarik FM. There are also various schools and colleges in the area, some of them being established just after the democracy was first introduced in Nepal.