Nariwal, known as coconut in English, is one of the popular fruits in South Asia. This hard and soft fruit is also one of the most popular fruits used during the pujas and worships. Devotees often offer coconut to the various temples in Nepal and India. Many people, instead of sacrificing an animal prefer sacrificing (breaking) a whole coconut in the temple. However, the outer layer is removed before breaking it. Also the shops in front of the temples sell coconuts for the worship. It is worshiped as a form of Ganesh during Laxmi puja in Tihar and also the whole coconut is used to make offerings during various religious practices.

Besides eating raw, it could also be used to make laddus. Nariwal ko laddu is one of the most desired sweets in Nepal, however, the lack of knowledge regarding its preparation process and also the time and effort used behind making it is one of the many reasons why most of the people do not prepare it at home. This article mentions a simple way of making Narwal ko Laddu that requires nothing more than coconut, sugar and a desire to prepare it. 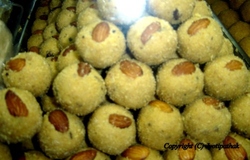 First of all, remove the outer layer of the coconut and break it into two equal halves (be careful while breaking it). Then using a grating machine (machine, which resembles the chulesi, for grating coconut are available in the markets where you could buy iron utensils), grate the coconut but be careful not to go too deep (as that would bring out the black layer turning the laddus black in color). When that is done, take a deep frying pan and heat it. When it is heated, put the grated coconuts and stir fry them on medium heat until it slightly changes its color and oozes oil. Also, a pleasant aroma fills the kitchen. Then, add sugar and keep stirring until the sugar melts. Do not stop stirring because if you do, the lower layer will burn. After the sugar is melts, remove it from the heat but make sure it does not cools. Take small amount of the mixture and make balls in the size you desire. Do it when the coconut mixture is still hot and squeeze out as much oil as you can from the mixture while making balls. Let the balls cool and then store them in an air tight container. Refrigerate them to preserve for a longer time, else do not keep out for more than a week.

You could also add dry fruits like almond and cashew if you like. Just make sure to ground them before mixing with the coconut.