Located about eight kilometers from Lalitpur, the temple of Bajrabarahi is one of the four famous barahi temples in Nepal. The area is just about 30 minutes drive from the city and it is famous for bird watching and picnic. Hence, a lot of people coming to visit the temple also include picnic in their schedule.

According to the legends, the temple was established in the month of Chaitra in 784 BS by Shrinewas Malla and it is said that the place where the temple stands today, there was a pond in the middle of the forest back then. It is believed that the goddess Bajrabarahi incarnated from the pond and hence, a temple was established in its place later. The temple not only has the image of the goddess but also the statue of Nawadevta on its left and right sides, along with the statue of Lord Shiva. Also, the temple does not have a gajur (pinnacle), which is quite uncommon for the temples in Nepal, especially Kathmandu. It is said that the gajur was made in Patan and the night before it was to be put, the priest of the temple saw a nightmare where he dreamt that anyone who would try to put the gajur in the temple would die of heat injury. Hence, the idea of putting up a pinnacle on the top of the temple was dropped and the temple remained without it. 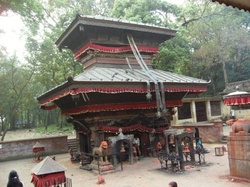 The temple is surrounded by a huge forest which is famous for bird watching as a wide variety of birds and around 166 varieties of flora including rare orchids could be found here. Among the forty-eight different varieties of birds, some of them are parrots, Bengal green pigeon, black drongo, blue-throated barbet, crested serpent eagle, etc. This is also famous research field for the students of environmental science. Also the farmers are seen carrying bottles of milk to offer it to the goddess. They believe that if they offer the first milk from their buffalos, after the buffalos have given birth, to the goddess, then they would get pregnant every year and give lots of milk.

The temple is situated amidst a beautiful place which still has the untouched beauty of the nature that is quite difficult to find in the hectic and busy areas of Kathmandu. The area is quite except for the chirpings of the birds. This place not only has a religious significance but has equal natural and environmental value. If you are planning for an outing, Bajrabarahi temple might be a good idea as you could go for religious purpose as well as have fun with your family and friends.