Nepal is diversified country when it comes to culture and ethnicity. People from every walks of have their own distinct flavors and cuisines and also the meat they prefer varies. People from the communities like Rai, Limbu, etc. do prefer pork meat than others.

Here is one of the many ways to make Pork Curry. In this recipe, however, pork is cooked together with iskus (chayote squash). 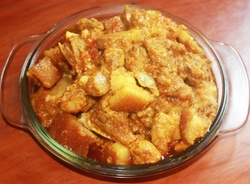 First of all, take a pressure cooker and add pork meat to it. Then, add chopped onions, garlic, ginger and tomatoes over it. Now, sprinkle chili powder, turmeric and salt on top of it and then add a cup of water.

After that, switch off the gas but do not remove the lead until the steam goes away itself. When that happens, open the cooker and mix iskus gently so that the pieces do not become mushy. Your Pork Curry is ready to serve hot with plain rice.

You don’t need to add oil while cooking pork as it is cooked in its own fat.