Gautam Buddha, the light of Asia

Gautam Buddha was born as Siddhartha Gautam in Kapilvastu, Nepal around the 500 B.C. He is also known as the ‘Light of Asia’ and the “the Enlightened one”. Buddha, which meant one who is awake, is the title he received after getting enlighten. 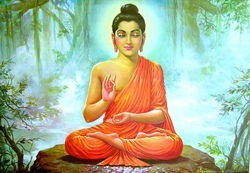 He was the son of King Suddhodhana and Queen Mayadevi of the Sakya clan in Lumbini. One night, his mother dreamed of a white elephant ascending down from heaven to earth and entering into her womb. The white elephant meant that the baby in her womb was pure and powerful. His mother died seven days after his birth and he was raised by is step-mother Gotami.

After his birth, during his naming ceremony, a priest had predicted that the prince will be a great spiritual leader one day and abandon all the worldly pleasures. His father was afraid that the prince will leave the palace so the King always kept him inside the palace. The King tried to keep Buddha away from the sorrows and pain and provided every facility. He got royal education and training inside the palace and was married at the age of 16 to a beautiful princess Yasodhara.

One day, when he went out of the palace in his chariot, he saw an old man, a sick man, a dead man and a monk who was very happy and clam. He went to temples searching for the reason for sufferings but could not find anything. Even though his charioteer tried to explain him that these states are inevitable, he could not but keep thinking about it. Few days after his son Rahul was born, he secretly went out of the palace at night.

For many years, he looked everywhere, read everything to help people from suffering but could not find anything. He starved himself and took upon great physical torture but still nothing happened. He realized one should have a healthy body and mind. So, on the day of Buddha Purnima he ate milk-rice and sat under a Bodhi tree for meditation. Next morning, he realized that he had been enlightened. It was in Gaya of India.

He went to his former friends and shared his knowledge with them. Many people became his disciples and later on, the Buddhist religion was started. He died at the age of 80 because of illness.

Gautam Buddha preached the importance of balance between physical and mental conditions of human life. He believed that it is mind that needs to be at peace and under control. Buddha is one of the greatest pride Nepal has and is responsible for the start of the Buddhism all over the world. Nepal is a proud country to be the home of  Gautam Buddha, the Light of Asia.