Naan is a type of flat bread that is cooked in clay oven. It is more like baked flat bread as it is directly cooked in the oven. It is widely popular throughout Nepal and every restaurants and hotels have various types of naans available in their menu. Among the various, this article discuss about preparing one variety of naan that is, Gorkhali Naan.

Warm water according to the necessity 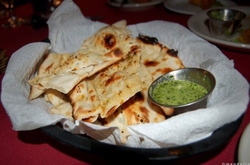 In the very beginning, take a large bowl and combine flour, two tablespoons of melted butter, baking powder, baking soda, sugar and salt. Now, make a well-like structure in the center and add milk and yogurt and form soft dough. Then, dust the kneading board with flour, place the dough on the board and knead for about ten minutes. Now, cover it with plastic wrap and leave it for thirty minutes. Then, knead the dough for another five minutes and divide it into three inch balls, when done. After that, roll out the dough balls into eight inch circles and cover it with plastic wrap.

Next, brush the naans with melted butter and place it in the hot clay oven farther from the open fire. Bake for about four to five minutes until the naans have risen and the surface has blistered and turned slightly brown in color. Be careful not to over bake it. You can also place the buttered naans on a baking stone and bake in a conventional oven at 4500F. For added taste, season it with garlic, herbs and other spices and serve your Gorkhali Naan hot with vegetables or meat.