Born on March 28, 1993, Samyam Puri is a young Nepali actor who made his debut (as a hero/lead) in Nepali movie Sayaad. Although he has acted as child artist in many movies, Sayaad is considered as his first movie where he has the lead role. Born to a director father Narayan Puri, one of the popular Nepali movie directors, it was only a matter of time for him to develop interest in movie industry. His father currently works as CEO in Himalayan Television and his mother runs a Co-operative targeted for woman and also helps underprivileged women in the society. 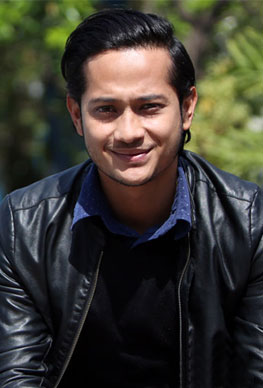 Interested in media, law, psychology and foreign diplomacy/political science, this young actor does not know what to study after his +2 level educations. He has acted in fourteen movies, few add commercials and three television serials (until 2012) and his first movie was Aago, directed by his father. His other movies as a child artist include Aafno Manche, Doman, Aafno Ghar Aafnai Manche, Mero Hajur, Kartavya, Mann Mero Mandaina, Hami Teen Bhai, Dharmaputra and Alpabiram. Unlike in his childhood days, he now studies the role he needs to play and work on the character prior to the shooting of the movie. His likes the thrill of being in front of the camera, getting into the character and forgetting himself for a while and also being appreciated for his passion and the recognition he get from the people. His dream character is that of Jonny Depp in the movie Blow or Ranvir Kapoor in Rockstar.

His movie Sayaad got a mixed review from the audience with a thumps up from the college students, the movie was targeted to. He believes that Nepali movies should be technologically advanced, needs originality, strong and well written story and good production and direction so that the people are not only entertained but the movie also gives a message to them. He has also worked as cinematographer in some documentaries, TVC and short movies and has also worked as Co-Director in the movie ‘A for America’.

This young actor with an interest in film making and direction, Samyam Puri spends his free time with his friends travelling around his residential area and enjoying the everyday life.