World’s tallest statue of Lord Shiva standing proudly at the height of 143 ft in the hills of Sanga village is one of the finest works of its kind. The credit for the construction of the statue goes to the founder of Hilltake Group, Kamal Jain who initiated the construction work and hired a sculptor from India and his dedicated team of 50-100 labors. It took them seven years to finish the construction of Kailashnath Mahadev, as the statue was named. 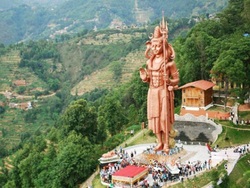 The installation of the statue in the mountain proved that a barren mountain could also be transformed into an amazing tourist place by the presence of the divine grace. The statue made of cement, concrete, sand, cement and iron rod, etc. was polished with 6000kgs of zinc and copper coating in order to protect it from the adverse climatic conditions and can withstand earthquake and strong winds. In presence of thousands of devotees, the inauguration of world’s tallest Shiva statue was concluded in June 2010 by Badrikadham Peethadhishwar Anant Shri Vibhushit Shankaracharya Swami Madhava Shramji Maharaj from India. This place was also declared as 8th important tourist place in Nepal by the then Human Resource and Tourism Minister Sharad Singh Bhandari.

The statue of Lord Shiva shows him holding a Trishul in one hand and another is raised in a blessing position. The place got an instant fame within a short period of time as it is a unique combination of nature and religion. The place observes thousands of visitors every day from young generations to old. It is also said that once a twelve year old girl named Suveksha Shrestha discovered the face of Lord Buddha on the belly of the statue which is indeed a surprising and amazing achievement in sculpture. The view from atop the hill is fascinating and interesting. Also, there is a health spa and resort (Hilltake Health Spa and Resort) in the background which is also regarded as the only medi-spa in Nepal and a park in front of the statue is also relaxing and pleasant.

Sanga is one of the must-visit places in Nepal not only for its religious value but also for its rich natural beauty. This world’s tallest statue is definitely a pride of the nation, a precious asset of Nepal.