Situated near the New Road gate in Kathmandu, the small temple of New Road Ganesh is famous for wealth giving and getting progress in business. The temple got its name from the place it is located in. Lord Ganesh is also known as Vighneshvara or Vighnaraja that means the Lord of Obstacles (both, material and spiritual obstacles). He is worshiped for removing obstacles, although it is believed that he used to place obstacles in the path of those who needed to be taught a lesson. 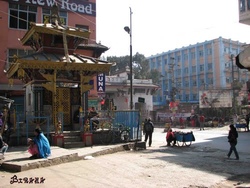 People living in the New Road area come to worship Lord Ganesh in this temple before they start any new ventures. Lord Ganesh is often associated with the ganas, the numerous attendants of Lord Shiva, for which he is also known as Ganapati. Unlike other temples of Lord Ganesh, the idol in this temple is not red but white in color and the roof of the temple is made of gold. The temple of New Road Ganesh is made according to the Yang principle or the principle of male energy. This temple of Lord Ganesh, being famous for giving wealth and solving problems related to business, it is also called the temple of Business Ganesh.

Lord Ganesh is the first one to be worshiped during any pujas or celebrations and he is also considered as the one who removes all the problems and sorrows from the lives of his devotees. People often come to the Business Ganesh temple to perform puja to solve their business related problems and financial troubles. It is one of the popular temples in New Road area.