Born on 4 February 1972, Karishma Manandhar is one of the most popular and leading actresses in the Nepali film industry. She started her career in acting with Prakash Thapa’s movie Santan when she was only fourteen years old and was studying in class eight. Although she was born in Jharuwasari, Lalitpur, her childhood was spent in Thapagaun, New Baneshwor.

Married to Binod Manandhar of Rajbiraj in the year 1991, Karishma Manandhar received training in dance and acting from Madhimati Dance and Acting Training Center, Mumbai. She is considered as one of the few evergreen actresses in Nepali movie industry and is known not only for her acting skills but also for her beauty. 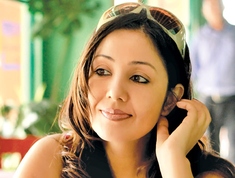 She had spent more than twenty years in the movie industry as a successful and leading actress, a superstar of Nepali cinemas and has been able to make her own place in the hearts of the people. She has been successful to have a huge fan following and not only the former but also the contemporary audiences likes and appreciate her acting and beauty. Some of the movies she has been starred in more than seventy movies including Santan, Kasturi, Allare, Bhauju, Manakamana, Truk Driver, Sapana, Basanti, Dhukdhuki, Jindagani, etc. During her acting period, she was usually paired up with the legendary actor Rajesh Hamal and their on-screen chemistry was loved by the audiences of the time. Most of their movies together had been a huge commercial success and their pair had been considered as the Golden Couple after Bhuwan Kc and Tripti Nadakar.

She, however, left the movie industry and moved to the United States where she stayed for many years until she returned back to Nepal and opened up a shooting studio in Godavari. Besides acting in the movies, she has also been featured in some of the television commercials and the billboards around Nepal for the endorsement of Dabur Chyawanprash. She has also entered into the world of movie production with the projects like Dhukdhuki and Babusaheb. She currently (2013) manages a shooting studio named K.B. Film Private Limited at Godavari.

The evergreen Nepali actress Karishma Manandhar has also been to many countries and in the year 2056 BS, she received the honor of Popular Actress of the Decade and was also awarded the most prestigious Gorkha Dakshin Bahu Fourth and many other awards and honors.