The Festival of Bibaha Panchami

The festival of Bibaha Panchami is celebrated to mark the auspicious day of the wedding anniversary of princess Sita of Janakpur and prince Ram of Ayodhya (India). The wedding took place on Marga Sukla Panchami, (November-December) hence, the day is called Bibaha Panchami. 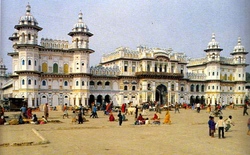 It is celebrated at the Janaki temple in Janakpur Dham for seven days and the devotees from all across Nepal and India throng to this place for the celebration. During the grand celebration, the temple is decorated as a Mandap (a Hindu marriage place). The idol of Sita and Ram are decorated as bride and groom and the Hindu marriage ceremony is performed to represent the marriage of the divine couple. The idols are worshipped and people prepare delicious food for the family gatherings that takes place later in the evening. Also, a big fair is held during this festival and a huge crowd of devotees gather in the temple premises. In town areas, some communities also organize Barat (Janti procession) where a male acts as Ram and another as Sita.

According to the legends, Janakpur, also known as Mithila, was the kingdom of Janak. He had organized a Swayamber ceremony where his daughter Sita was expected to choose a groom for her, among the princes of different kingdoms present there. However, for being eligible for the marriage, the prince must string the Shiva Dhanus (Bow of Lord Shiva). No one other than Ram could lift it and when he tried to string it, the bow broke in two halves qualifying him as the perfect groom for Sita.

The wedding ceremony takes place at Bara Bigah Maidan and on the day of the wedding, the guests from the groom’s side start the procession from the Ram Mandir and the bride’s side start from the Janaki temple. The procession goes around the town with musical bands and performances and they worship the idols of Lord Ram and Sita after they reach the wedding venue.

The occasion of Bibaha Panchami is the best time to visit Janakpur for those who desire to observe the culture and traditions of the place. This festival also marks the history of good relationship between Nepal and India.