Laying on the border areas of Chitwan and India is the religious site Devghat. Serving a as travelers’ and devotees’ paradise, this place lay in the confluence of the Kali Gandaki and Trishuli river where the hills of Mahabharat range meets the Terai plains. Also known as the meeting place of the gods, the place is surrounded by forests on the hill side. The area more or less reminds of the religious site of Rishikesh in India and every second building here is a temple or an ashram.

An auspicious site for the Hindus, Devghat is also the meeting point of two important rivers of Nepal, Kali Gandaki coming through Muktinath (also known as the holy abode of Lord Vishnu) in the western Himalayas of Nepaland Trishuli (known to be driven by Lord Shiva’s Trishul). The two banks of the rivers contains numerous shaligrams (stones with round fossils inside that are considered as Vishnu’s incarnation) and lingams (phallic shaped stones that represents Shiva’s incarnation) making it a holy site and also the rivers join the sacred Ganges, the holy river of India.

Devghat is believed to have been visited by many gods and sages and it is also said that it has always been inhabited by holy men in the caves and huts along the rivers. Lord Rama and his wife Sita, Lord Krishna, Lord Janak (the King of Mithila) are said to have visited here. According to the legends, it is also considered as the cremation ground of the Goddess Sita. 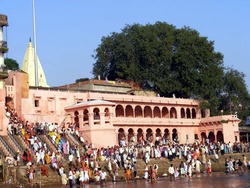 Many people (the Hindus) live here during the last stage of their life and spend their time meditating and worshiping. There are many ashrams to accommodate them and also parks, gardens and forests that have trees like banyan, rudraksha, pipal, sal, banana and mango along with various medicinal herbs. Moreover, various musical programs, feasts and rituals are conducted here on a regular basis.

The best time to visit the place is during Maghe Sangrati, also known as Makar Sankranti as many devotees come here to bath in the holy rivers and worship the countless temples. The place is easily assessable by a three-four hour micro-bus ride from Kathmandu towards Narayanghat (confluence of nine rivers). From there, you just have to walk about four kilometers or wait for the next bus. Although there are no hotels, there are friendly people who could provide you accommodation and food.