Shailaja Adhikary, from banking to education

Shailaja Adhikary, the founder of IEC School of Art and Fashion and also the managing director of Euro Kids, a brand owned by Euro Kids International Ltd, which is India’s number one pre-school chain, initially had a career in banking.

After completing graduation in science from Tribhuvan University in the year 1994, she joined the Grindlays Bank in 1997 in an assistant level. She established IEC in the same year and soon after that, she realized that she had not been able to give enough time at IEC. Although the work and the field had been different, her experience at Grindlays gave her an idea regarding the work ethics in a friendly ambience. She decided to devote her time into education sector as IEC was at an initial phase and had a huge potential rather than stretching herself into two very different sectors. 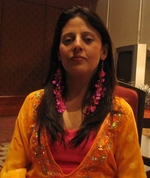 Later in the year 2004, Adhikary established Euro Kids with a sole purpose of fulfilling the absence of a school equipped with all the facilities and infrastructure that would promote the overall development of a child. She manages overall functions at Euro Kids as well as IEC to ensure that the codes of conduct are being carried out efficiently. She feels having a special bonding with each of her students from the housewives enrolling in IEC and later setting up their boutique to children being enrolled in Euro Kids.

This quick learner believes in team work and she accepts never to have problems just because she is a women. She rather believes that such thoughts are the reason that restricts the women from progression. She believes that one should come out of their cocoon and garnish their skills and knowledge, it is only after we start that we could realize our potential. Moreover, patience and hope are two things that everyone needs to have.

Euro Kids Tangal was awarded ‘Maximum Enrolments for 2010-11’ at a ceremony held in Mumbai last year. She believes that it was possible because of her dedicated staffs and the faith the parents have over them. Adhikary also plans to set up IEC College for BBA and MBA by mid 2013. Taking a leap from banking to education, Shailaja Adhikary has changed and shaped the lives of many of her students through education.