Mahankal, the Lord of time

The temple of Mahankal is situated near New Road in Kathmandu. Mahankal denotes someone who is beyond time and the Lord Mahankal is also known as Mahankaleshvar. The temple as well as the statue of the god is one of the most amazing examples of the Nepalese ancient heritage. Every day thousands of devotees come to worship the Lord in this temple. The area is also called Mahankal because of the presence of the temple.

The temple is situated just at the side of the road opposite to an army hospital and just beside the Tudikhel ground. The temple is housed in a two storied white colored building with the main temple on the top and an old bookstore at the bottom floor. Also, there are several statues of various gods and goddesses engraved around the temple. And the main statue with other several small statues is enshrined on the top floor of the temple and is visible from the road itself. 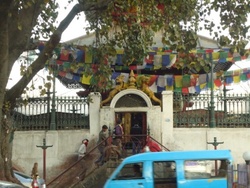 Lord Mahankal is also considered as a form of Lord Shiva. Mahankal is believed to the controller of time and one who can save from bad times in the life of the people. When people are having troubles and bad times in their lives, they usually perform puja here. People who come to worship here also visit the nearby temple Sankata to offer puja as Mahankal is the form of Lord Shiva and Sankata is Shakti. Each day, thousands of devotees come to the temple to pay respects to the Lord and seek his blessings to overcome their pain and troubles. Especially on Saturdays and Tuesdays, maximum number of devotee throng around the temple after they have visited the Sankata temple few minute walk from here. In country like Nepal where Hinduism and Buddhism go side by side, this temple of Mahankal, the Lord of time, has high religious significance not only for the Hindus but also for the Buddhists.