Born in the year 1985, Reecha Sharma is a Nepali actress who was also one of the top ten semi finalists in the Miss Nepal pageant 2007. She is popular for her acting in music videos, tele-films, movies and walking down the ramp. After her debut in Nepali movie industry with the movie First Love, she acted on few other movies her second being My Love Story.

Born and raised in Kailalii she came to Kathmandu for further studies and has been living here since. As a start of her career, she worked in a music video for Yash Kumar‘s song directed by Alok Nembang. She appeared as a violinist who loses her eyesight. She went on to host ‘Music of Your Choice’ and ‘Top Ten’ on Image Channel and ‘Superstar’ on Nepal television after that. 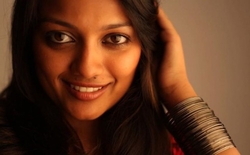 In the year 2007, she represented her town in Miss Nepal pageant where she got selected as a top ten semi-finalist. Although she could not make it to top three, she started her acting career after that. She has acted in a television series Hamro Team (2011) as the lead character Seema who is a female coach for all boys football team. The series was popular and she got huge critical acclaim for the show.

She has acted in many music videos and has also worked on number of Nepali films. Besides First Love (2010) and Mero Love Story (2011), she has also acted in movies like Highway (2011), Loot (2012) and Visa Girl (2012) where she appeared in lead roles. The model turned VJ turned actress Reecha Sharma had become a popular face in the Nepali entertainment industry with her acting and anchoring skills. It is also said that her first television series Hamro Team might return with a second season. She has become successful to keep the audience entertained with her acting and anchoring skills.