Caravan made history by being the first Nepali film to be nominated for the Oscar Awards. The film shot exclusively on the rough mountain terrains of Dolpa, the biggest district of Nepal, was nominated by the US Academy of Motion Pictures and Sciences for the 72nd annual Oscar Awards (2000) under the foreign film category, along with four other films including “All About My Mother” from Spain which bagged the award. 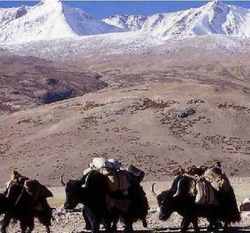 Initially called as a boring documentary on mountain people’s livelihood by some, the film went on to win applauds from not only the tourists, who are naturally enthralled by scenes of the Himalayas, but also the local population who are otherwise fed exclusively with the Bollywood formula films. The film’s offbeat storyline instantly clicked with the bored Nepalese film-goers who had been looking for a change.

The film basically portrays the life of salt traders of the region who lead yak caravans along a long and diffcult trek across the Himalayas to Tibet. It depicts the harsh life of the mountain people and their strange rituals. The film revolves around the central character of Tinle that is played out by Thilen Lhondup. Tinle is the chieftain of the salt traders, whose eldest son has just died. He refuses to allow the young Karma, whom he accuses of being responsible for his son’s death, to lead the caravan. Karma gathers young members of the clan and sets off for Tibet leading the caravan on his own. Stung by such a rebellion, Tinle with the help from his old friends and with his grandson, who would the head the caravan, decides against all odds to set out for the formidable destination.

The roads on the way are very narrow and often frightening. At one point a big yak falls off from a cliff into a big blue lake, Lake Ringo. They consider it the price they have to pay the demons. On the way, the two caravans meet and Karma’s followers leave him alone and join Tinle with a faith in his wisdom.

This film is wonderful in many ways. The camera catches the harsh journey of the Dolpelians and presents a picture of the difficult life led by them. The reality is shocking indeed. The film gives us knowledge about the lifestyle, culture and tradition of the people of Dolpa. The desert landscape of Dolpa is effectively shown in the film.

The story prior to the beginning of the shooting of Caravan is also very fascinating. It is learnt that director Eric Valli, a French national, had initially conceptualized Caravan as a documentary. His meeting with Neer Shah saw Caravan in a new light – as a celluloid film. But that was the only easy decision Valli had to make. He was soon faced with the difficulty of obtaining money to shoot the film. It was at this time that Neer Shah (actor and producer of the Nepali film industry) offered to make an investment and also act as advisor in the venture. Investments also came from France, England and Switzerland. The film is said to have incurred a total put in of Rs. 320 million.

Although having bagged several awards for his documentary Honey Hunters, also shot in Nepal, Caravan was Valli’s first step into mainstream cinema. And it was indeed a bright beginning, for his first film itself gained him an entry into the Oscars. This is no mean feat considering that Caravan has been nominated in the foreign film category – the only category open to non-American films. Gaining entry into any other 52 categories requires that the film-maker be an American citizen. Valli’s efforts, 15 years of study and nine-month long shooting in an inhospitable terrain, finally paid off.