The temple of Naxal Bhagwati is dedicated to the Hindu goddess Bhagwati or Durga. This magnificent temple is located in Naxal, Kathmandu and is visited by hundreds of devotees every day. It is also one of the most famous pilgrimage sites and also one of the ancient temples in Nepal. It is often said that the one who worship at the temple and have faith over the goddess, they would not face any difficulties in life. 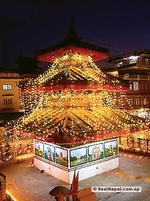 Naxal Bhagwati is a noble mother who fulfills all type of wishes of her devotees who have faith on her. This temple of female consciousness has been created for women and men and is a sanctuary of teachings from East and West around notions of gender, sexuality and spirituality. In Shakta Tantra, the female energy or Shakti is considered as the creative and dynamic energy while the male energy is the receptive and passive form. It is also said that the temple of Naxal Bhagwati and Shova Bhagwati was built by the same artist so there are similarities between the two statues. The temple of Naxal Bhagwati is very famous for every kind of wish fulfillment.

It is also said that if you are haunted by bad spirits then conducting a puja in the temple will be of great benefit in protecting you from its evil effects. It is said that the devotee offer red kumkum to the (sacred red powder) to the goddess as it pleases her. Naxal Bhagwati is also called Satya Swaroopini which means the ’embodiment of truth’. It is believed that worshiping the goddess will remove all the obstacles that come our way while starting a new venture, and also every kind of personal or professional problem are solved. It also said that the power of the goddess will protect her devotees from every kind of evil and bad spirits and negative energy.