A book with the stories of relationships of the character with the society and with themselves, Tilled Earth is a collection of short stories by one of the prominent Nepali writers Manjushree Thapa. The stories of the book try to capture the dynamism and diversity of Nepali society and through the life of several characters with diversified background, it has tried to explain life as a journey which might not always turn out as planned. Something might go wrong or you might end up doing something that you never thought you would. 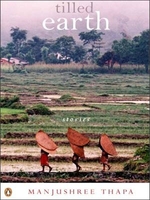 The stories portray various characters, from children to adults to middle-aged and also, they come from different backgrounds, in terms of geography as well as economy and education. From Nepal to those living abroad, the stories are about people and the things that drive them or bring them down, things like their relationships, frustrations and their discovery of themselves. Many characters in the book have evolved around their professions and most of them are social activists, literary figure or government workers, those involved in the profession with strong political leanings. However, their life are not interesting, rather they are shallow.

The book published in 2007 by Penguin Publications, India, shows the characters who struggle within themselves and in their interactions with the society combined with hardships of an underdeveloped economic and security system. Although most of the stories are set in Nepal, few are set in abroad, Europe and USA. Each character is in their own quests of finding themselves, while one of the characters learns how to play ‘Solitaire’, another shuffle through various career options before choosing one. Such are the characters of the book, with the stories of their own, their journey of finding their inner-self and the results of what they find.

The short story collection by Manjushree Thapa about the lives, hardships and relationships of the Nepalese living in Nepal and abroad, Tilled Earth is a good read.