Chulo is a traditional Nepali stove that is made out of mud. People in rural areas, where the sophisticated gas stoves are not as common, use it for cooking purpose. Also the people in many parts of Terai use it as an alternative cooking oven. 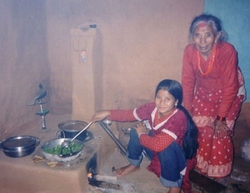 Chulo requires wood for burning. Cooking in a chulo is time consuming as one cannot turn on or off the heat level as easily as in the gas stoves. However, the food cooked in this traditional Nepali wood stove is much tastier than that of any other oven or gas. It is made of mud and also uses some sticks in order to give it support. It has two holes, one on the upper part where the utensils are kept and another on the side from where the woods are put in. A pipe usually made out of wood or metal, locally known as Dhungro, is used to blow to light up the fire. The utensils are coated with mud on the base before using it for cooking on the chulo. It is done to protect the base of the utensil from burning and also to protect it from turning black.

Traditionally, it used wood for cooking but it can be found in modified forms that use coal instead of woods that are cheaper and easily available. It is commonly used in rural areas, however, due to the continuous rise on the price of the petroleum products and also the rich taste in food cooked on it, many people in the various parts of the urban areas use it as an alternative stove.

So, when are you trying the authentic Nepali food cooked in a traditional Nepali Chulo??