One of the hidden tourist destinations of Nepal, Dolpa‘s rugged terrain and remoteness is what adds up to its beauty. Rich in both nature and culture, the district is situated in the north east part of Mid Western Development Region and is covered with Himalayan Mountains. Laying on the trans-Himalayan region of Nepal, the district covers the area of 7967.70 sq km making it largest district of Nepal. Although it is the largest district, it is the least populated district of Nepal, remoteness and lack of facilities being of the major reasons behind it. 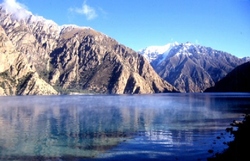 Dolpa has its headquarters in Dunai from where the visitors can get permit for Shey Phuksundo National Park. The traditionally important activity for most Dolpa households is the animal husbandry and also transhumance is a way of life in most of northern Dolpa. It also stands as the last stronghold of Bonpo religion. Although the largest ethnic group found in Dolpa is Chhetri, other groups such as Magar, Gurung, Thakuris, Brahmin, Newar, Sherpa, Sarki and Damai. The settlement of Dolpa is confined by the Dhaulagiri Himalaya in the south and east, Sisne and Kanjiroba Mountain in the west and Tibet on the north. Probably the highest settlements in the world, these mongoloid featured people are Tibetan speakers. Some unique culture and traditions are practiced in Dolpa. Usually the brothers have a common wife and the marriage could be of any type, by arrangement, capture or elopement. Although Dolpalis are Buddhists, some of them also follow Bon-po sect of Buddhism and they have different ways of disposing the dead. While some throw the corpse into the river, others cut the flesh into pieces and feed the vultures. The language spoken by them is known as Kaike language and it is believed to exist only in Dolpa. There are around 130 gumbas and various monasteries, the most popular being Shey Gumba.

To reach here, one needs to fly to Jumla and walk for few days or fly to Juphal, the nearest airstrip to the park.