One of the most important festivals of the Tharu women of the middle as well as the eastern Terai, Saamaa Chakewa is neither a fast nor a religious occasion as such, rather it is a celebration in the memory of Saamaa, Saamb and Chakrawat each year in the moon-light side (up to the full moon day) of the month of Kartik. The origin of this celebration is said to be based on the most tragic epic of the Tharu community.

The entire epic is said to be full of very sorrowful songs which comes as the dialogues between sister (Saamaa) and brother (Saamb) and between wife (Saamaa) and husband (Chakrawat). The epic that describes the immortal love between brother and sister and husband and wife is sung on this day. The songs not only tell the epic story but also are full of helpful teachings for welfare of human beings. Traditionally, however, it is also called the barrier of the Tharu community and there is a common proverb in the Tharu community that says ‘Saamaa ke muri dub, bar ke muri ug‘ which means that ‘when a married lady used to come to her maternal place on the eve of Jitiya Pawain to celebrate it, she only returned to her home after celebrating Saamaa Chakewa festival and no husband had the right to call his wife home before that, however, after the celebration, it is the husband’s turn to ask his wife to come home and participate in the harvesting of paddy’. 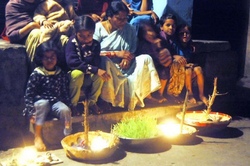 Many legends and beliefs are attached to this festival and the Tharu community believes that in ancient times, probably around 2000 years ago, there was a king named Kishan Bhusan Sen in the kingdom of Garbh who was famous good name and fame. The king was very honest and dear to his pupil and he had an ideal wife named Aadambati. He had a daughter named Saamaa and a son named Saamb who were obedient and went to school daily. When the daughter was twelve years old, she was married to a prince named Chakrawat of Maurya dynasty of the kingdom of Magadh. A courtyard named Churath, in the kingdom of Garbh, however, fell for the beauty of Saamaa and tried to lure her into loving him. As she was married and also strong of her character, she refused him which he took as an insult and then, with the fear of the king and anger against her, he reported it all to the king modifying the facts.

The angry king send his daughter to exile in Brindabon, a dense forest in the north of Garbh Desh, without investigating the matter and as obedient as Saamaa was, she took her father’s order with courage. However, when the mother, brother and the husband found out about the matter, they began to investigate the matter and found her innocent and Churath guilty for which he was punished severly. They asked the king to take back his words and also, Saamb and Chakrawat tried to convince her to return to home from the exile. However, to keep her father’s word, she did not return home. The whole story and the songs in Saamaa Chakewa speak of pain and sorrows. It is also believed that when the king realized his mistake, he took it as her bad luck and asked the queen to send her things to make her living better, however, Saamaa returned every thing and involved herself in hard penance because of which she a the life of a bird Chakewa (the life she desired).

This festival has been, since, followed by the Tharu community in her memory every year and during the whole ceremony, the sisters wish best for her brother every night. On this festival, the ladies built the statues of Saamaa, Chakewa, Satabhainya, Chugala with long mustache, Brindabon badhani, dog, bhamara, dance party, etc. with clay just after the Chhath brat. The statues are colored and put into a new basket made of bamboo along with a burning lamp to honor her. The basket is decorated with flowers and colorful papers. At night, after their dinner, all the ladies gather at a place at the place of a village head with their decorated baskets with Saamaa. While some women carry their basket on the head, others start to sing and like that, they move slowly to the road and then to the house of a festival member where they are welcomed and provided with the mats to sit on. They put the basket on the ground and pass 2-3 hours singing sweet songs after which they offer blessings to their brothers and curse the wicked. Saamaa is worship there and after that, the group moves back to the place where they started. There, the procession formally ends for the night and they return back to their respective home. This process continues until Purnima when they formally end the ceremony for the year. On the last day, they start the procession from the first play but do not go to the house of other member, rather they walk around the whole community in the same way (the process is known as Dagar Bullon) and return to the place where they had started it ending the ceremony for the evening. 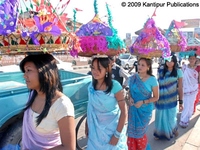 The closing of the ceremony takes place the next morning when the brothers help their sisters to make a nice looking temple of bamboo and colored papers. The temple is carried to the pond or water source. The sisters wake up early, clean the houses and organize essential materials for closing the festival and gather at the same place as before where they again start their procession with songs and their Saamaa basket towards the pond. They take bath in the pond, worship their Saamaa and place them in the temple. They distribute sweets to the people who had participated in the process and the brothers then place the temple in the center of the pond and every one returns back to their homes marking the end of the festival.