The Golden Gate in Bhaktapur

One of the most beautiful and artistic examples of the ancient Nepali (Newari) architecture, the Golden Gate, known as Soon Dhoka in Nepali, of Bhaktapur Durbar Square is a masterpiece not only of Nepal but of the world. This door of the great monument is decorated with mysterious monsters and other mythical creatures and is of great archaeological, historical and religious value. It also depicts the great architecture of the period which indeed is of immense value.

Built by the Malla King, Ranjit Malla in the year 1753 after he successfully conquered Dudhkoshi and Tolkha, this gate provides an entrance to the main courtyard of the palace of fifty-five windows. It also provides an access to Kumari Chowk and the Taleju Mandir and connects the two blocks of the fifty-five windowed palace. It is a pride of Nepal because of its immense religious, archeological, historical and architectural value. The top of the door is adorned by a figure of the powerful Hindu Goddess Kali and along with the image of Garuda (a mythical bird) assisted by two heavenly nymphs. 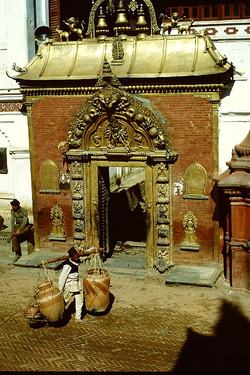 An eminent English art critic and historian Percy Brown has said the following thing about the Golden Gate, “The Golden Gate is the most lovely piece of art in the whole Kingdom: it is placed like a jewel, flashing innumerable facets in the handsome setting of its surroundings”.

Not only him, but whoever visit the gate is captivated by its beauty and art. It is one of the most beautiful gilded copper works in the Kathmandu valley. An image of a doorkeeper, a vase symbolizing good fortune and figures of deities like Bhagwati, Ganesh, Bhairav, Kumari and Kali adorn either side of the door frame. Just above the door, there is also a figure of the ten-armed goddess Taleju attended by Shri and Laxmi seated on a crocodile and tortoise. The Golden Gate in Bhaktapur Durbar Squareis a masterpiece of ancient Nepali architecture that has lived through the centuries of history.