A director, script writer, an actor and also an inspector by profession, Bal Narsingh Rana born on 18 December, 1976, wears many hats. Interested in acting and movies since his childhood, he lived his dream for the first time with the movie Ye Mero Hajur where he acted in the role of an inspector. The man who desired of being an actor since his childhood also held the aim of joining the Nepal Police Force or the Nepal Army.

As he grew up, his aim got victory over his desire and he joined the police force as an inspector because he knew that he could not become a police inspector if he became an actor but he could get into the field of acting even if he was an inspector by profession, which is just what he did. He also worked as a media person within the police organization. 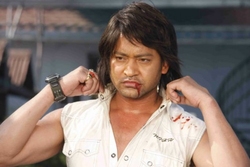 Following his debut in Ye Mero Hajur, he has worked in many projects since then and has written the script for as well as has directed more than fifty telefilms, documentaries, docu dramas, half a dozen music videos, a dozen radio dramas and few advertisements. Some of the projects he had worked on includes The Game (also wrote the script for the first time), Apradh Lukdaina, Moha, Paschatap, dhanko Moha, Charles Shobraj, Cyber crime (latter two related to crime Social telefilms for Asian Development Bank projects).

He has also worked in a Bhojpuri movie Muna, Kekara se kahi yi dukh hamar, etc. along with many other radio dramas ad Public Service Announcements. The music videos that he had directed include Aama Timro Aanshu, a national song by Dr Bhola Rijal, Dashain Aayo Tihar Aayo by Dr Krishna Hari Baral, etc. Although he gets many movie offers, he is forced to reject most of them due to his commitment towards the nation and the people as an inspector. The actor who was seen in the movie The Game, directorial debut of his movie editor wife Rakshya Singh Rana, Bal Narsingh Rana plans to direct and act on celluloid movie with his own script and home production.