Thyme seed, locally known as jwano, is considered to be one of the best sources of nutrients that a body requires. In Nepal, there is a tradition of giving Jwanoko jhol to a pregnant woman during her post-pregnancy period, children or people suffering from cold and people who are physically weak due to sickness as the soup is considered to be good for health.

The thyme contains many important essential oils that are found to have anti-septic and anti-fungal uses and it is said that it heals the wound fast. There are many benefits of thyme seed one being the source of nutrients, heals the wound, helpful to produce milk in mother to feed the child and to give relief from body ache, cough and cold along with helping you stay warm in the winter. The elements found in the seeds have disease preventing and health promoting properties and the thymol oil that is contains is proved to have antiseptic and anti-fungal characteristics. Besides these, the oils found in the seed are carvacolo, borneol and geraniol and the seed also has potassium, iron, calcium, manganese, magnesium and selenium along with vitamin B-complex, beta carotene, vitamin A, vitamin K, vitamin E, vitamin c and folic acid. Potassium is one of the important components of cell and body fluids that helps in controlling heart rate and blood pressure (one of the major health problems found in almost every human beign these days). 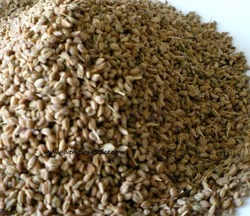 Jwano ko jhol is one of the many traditional soup recipes that is found in almost every household in Nepal, especially during winter season or if there is a pregnant lady in the house. It also has other benefits like helping in digestion and stomach ache. It is also said to ease the stomach pain during the menstruation period if eaten with hot water (first chew the jwano and then drink the lukewarm water or as hot as you can tolerate). It is also one of the most popular and commonly used spices in Nepali kitchen as it is used while cooking vegetables. This healthy seed, hence, is very common on all of the Nepali kitchens and households.