The man behind The Wilson Bikram Show

Wilson Bikram Rai became the talk of the town after his video named The Wilson Bikram Show channeled on YouTube. It has already been able to amuse many people who have seen his videos online. He tells us how his grandfather was awarded the Victoria Cross (a complete fictional story), in one of his videos. Having been featured in several Nepali movies including Kasle Choryo Mero Mann, Sayaad and Facebook, he is also into directing cerography – the art of engraving on wax. This multitalented artist was named Wilson because his father wanted a unique name for him. For his father, the name Wilson means “well son”.

Born and raised in Birtamod, Jhapa, his ancestral land is the hills of Okhaldhunga from where his grandparents came and settled in Birtamod. His father and his sister live in Birtamod, his mother, however, passed away when he was only nine years old. Addicted to movies since his childhood (which he likes to call Filmania), repeating and reciting the dialogues and doing caricatures of famous actors, deep down somewhere in his mind, he always knew that he would one day enter into the cinema business. 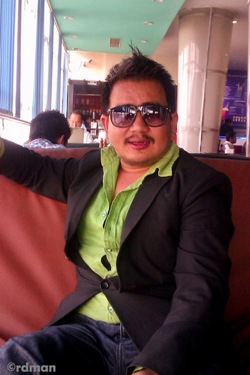 There was a shooting of a movie in his hometown, back in his childhood days and they were looking for a child artist just for one scene. His father told him about it encouraging him to go for the role, so, he considers his father as the inspiration for him. Having a good sense of humor and keeping up-to-date with all current aspects of the society is essential to become a successful comedian and a good comedian is the one who is always able to satisfy the audience with their originality and without the lame jokes is what he believes. And he thinks it is difficult to make people laugh than to make them cry.

Apart from being passionate actor, Wilson Bikram Rai is also passionate about direction and has already directed several short movies, commercial movies, ads and music videos. He is also good at singing and dancing and can do choreography as well. A simple, humble and down-to-earth type of person, Rai cannot see others in pain or in problems and whenever he can, he puts on a show and make all his friends happy and keeps them entertained. This versatile artist would also keep us all entertained with his videos of The Wilson Bikram Show.