On May 23, 2001, Temba Tsheri of Nepal created new record by getting the title of Guinness Youngest Everester. He enjoyed the title for nine years until Jordan Romero of California broke it in May22, 2010.

Khagendra Thapa Magar became the shortest man of the world in the year 2010, October 14, after he turned 18. He was also appointed as the goodwill ambassador of the Nepal Tourism Year 2011. 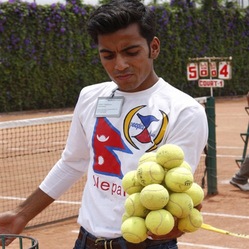 In the same year, 2010, Rohit Timilsina, a school teacher by profession set a new record by holding 23 golf balls on his palm for 3minutes 52 seconds beating the French national Arnand Deschamp who had held 19 tennis balls for 10 seconds. He also set a new record for shaking hands for the longest time.

Chandra Bahadur Dangi, 72, of Nepal got recognized as the shortest man alive in the world on February 2012 by the Guinness Book of World Records.