A wonder man in himself or a one man orchestra – to be more precise, Nhucche Bahadur Dongol can play, not two or three or five but twenty one madals (traditional Nepali percussion instruments) at one time. Although he was initially amazed by the people’s responses over his extraordinary talent, he has grown used to it by now and has realized that what seems to be a normal play for him is quite extraordinary and surprising for most of the people around him. After all, how often do we encounter an artist who can play twenty one madals as a solo artist?

Belonging to the rare breed that commands the right to be a living legend, Dongol was born to a family of musicians in 1951 at Tyauda Tole. He has also been on various world tours and international collaborations where he has been attempting to globalize the sound of the madal. For his extraordinary talent and mastery of the instrument, he has received the title of ‘Best Drummer of Nepal’ (1975, India), Good Artist of Nepal (Germany) and has also been awarded with the ‘Jyapu Talent Award’ awarded by the Jyapu Culture Development Trust for his decade long contribution to the promotion of traditional music. His biography is included in the syllables for the Bachelors of Arts in Music and he also serves as an Associate Professor of Music at Padma Kanya Campus. 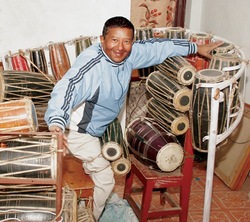 Before he became a musician, he was a folk dancer and an unfortunate accident on the dance floor ended his dancing career. The accident changed his life forever and he, under the guidance of Nhucche Man Dongol, started learning to play madal. The accident had happened in 1957 during a program to mark the coronation of King Mahendra which was held at the Phohora Durbar. The idea of using so many madals was proposed by great musician Gopal Yonjon in 1969 and during a cultural program for which they had collaborated, Dongol had used ten madals instead of one or two.

This one man orchestra has been successful to amuse and amaze thousands of people coming to his shows and one of the biggest moments for him came in the year 1985 while he was on tour around Europe. He had played at a show in honor of Her Majesty Queen Elizabeth, Prince Charles and Princess Diana, where the amazed Queen had looked at his hands and asked ‘how do you manage to play like that?’