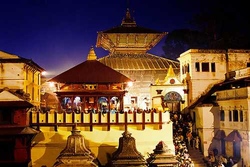 Standing proudly 23.6 meters above the ground in the middle of an open courtyard at Deopatan, is the largest Hindu temple of Nepal, the Pashupatinath. This temple is devoted to Lord Shiva or Pashupati (Lord of animals) who, according to legend, happened to take the form of an atelope and wander unknown in the forest situated east of the Bagmati river. Since the great lord took the form of an animal, he is known as the Pashupatinath and the temple is established in that very area. There is another legend regarding the establishment of this temple. According to it, Lord Shiva and his wife, goddess Parvati came to the east bank of Bagmati and fell in love with the place. Both gods took the form of deers and hid inside the forest. The gods found them later but they refused to leave. After much trying, Lord shiva agreed to return only if he would be called Pashupatinath. Similarly, there are several other legends in support of the establishment of this temple like the Cow legend and the Devalaya legend. However, according to historians this temple was built by Supus Padeva(a ruler from the Licchavi Dynasty). When he built it, it was a five storey temple which was reconstructed later by a medieval king, Shivadaya. The temple we can see today was then renovated by Ananta Malla.

After opening the shoes and washing  feet with clean tap water, we can enter inside the

courtyard through a gateway with Lord Shiva’s image in front. A fact that should definitely be mentioned is the floor, though made up of stone, is always warm. Even in winters, our feet won’t freeze. And after entering, a complete pagoda style of architecture can be seen, exactly like a typical Nepalese temple. This style includes everything from carved wooden raffers, two level roofs of cover with gold plating, four main silver doors and a golden pinnacle which shines brightly in the sun. All four silver doors are opened either early in the morning or late in the evening. During the day time, only the front door is opened.

There’s a huge statue of a bull(Nandi) which is approximately six feet tall and plated in bronze. It rests lazily in front of the temple though it’s eyes remain fixed to the Lord, just like that of a bodyguard. Beside Nandi, a totally orange Hanuman made up of complete black stone can be seen. On the right of Hanuman, Lord Rama, Lord Krishna and several other gods have their own personal temples.

On the left side of the temple, there is a stairway which leads to a temple with a hole through which one has to peep to see God in complete darkness. Then there is another stairway which will lead to a miniature form of sleeping Vishnu, the Budhanilkantha. Then one can either take a door to the left or move straight. 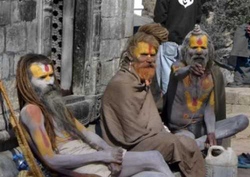 If we move straight, we can see a resting place with various sadhus, devotees and hippies too. Some will be singing vajans, some will be meditating while some are always high. We can either sit them and feel weirdly good or continue moving on the same path which leads to a door and a inside door where eighty four Shivalingas are arranged in a maze like style. Roaming around the maze is totally entertaining.

If we take the door, we can reach Aryaghat. In Hindu culture, dead bodies should be burned entirely and this particular Aryaghat, on the bank of Bagmati river and below the Pashupatinath, is considered the most sacred among the ghats. It is said that the dead people who are cremated here go to heaven directly.  The Aryaghat and the other side of the temple is connected by a bridge over the Bagmati river. On the other side, arati is held every night attended by hundreds of devotees. 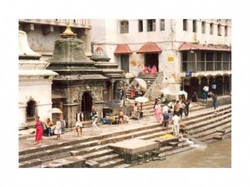 Another interesting thing about this place is the monkeys. Monkeys live here. They are found in every nook and corner of this place. Visitors are adviced to hold their bags tightly as the monkeys, though safe are spoilt by the great lord himself.

In conclusion, Pahupatinath temple is one of the greatest temple and a pilgrimage site for all hindus. Lord Shiva is the god of all gods, so he is the most worshipped and respected among our lords. Thousands of devotees pay visit to him everyday and hundreds will be chanting “Jaya Shambho!” on top of their lungs. This temple is most occupied on Mahashivaratri, Teej and on mondays.