Popularly served during the Pohela Boishakh festival (New Year), Panta llish is a traditional food item of Panta bhat with fired hilsa slice supplemented by dried fish (sidra/shukti), pickle, daal, green chilies and onion. It is a lightly fermented rice-based dish consumed in Nepal and other countries among the Rajbansi community. Panta means ‘soaked in water’ and bhat means ‘boiled rice’, hence, this cuisine is made of leftover rice soaked in water to prevent spoiling and is served generally with salt, onion and chili.

Popular especially in the rural areas of Nepal, Panta llish is served as a breakfast and in the state of Assam in India, Poitabhat, which refers to Dudh Panta, (milk with stale water-soaked rice) is offered during a marital ritual. Also some high-end eateries in the country serve this dish. 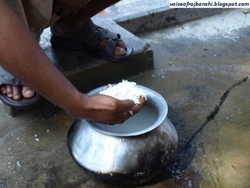 For making this dish, first of all, fresh rice is cooked and fermented in water for 12 to 24 hours and the longer it is fermented, tastier it becomes. Using usina chamal (brown rice) is better than other rice and also leaving it to ferment in an earthen-pot instead of metal utensil is better. The dish should be covered during the fermentation process to avoid any contamination and then, in the morning, salt is added to the basi pakhal before serving it with dry curries like aalu-bhutuwa, baigan-bhaja, bhaddi-bhaja or kardi-bhaja (bamboo sprouts). Also, a cup of curd could be added to it and the non-vegetarians could enjoy it with jhuri (small fish) and sukhua (dry fish) curry.

The bioavailability of minerals such as iron and zinc are improved by the fermentation process as a result of phytic acid hydrolysis which also increases the content of riboflavin and vitamin B. Panta bhat, as a result of fermentation, also contains some amount of alcohol. The liquid extract of the basi pakhal is called thir or taruani and it could also be served by adding a pinch of salt, two drops of lemon and few mint leaves to relish your thirst. Panta bhat is a famous traditional dish of the Rajbansi community in Nepal.