Bagiya is a snack made especially in Terai region of Nepal. This salty item is made of rice flour and is more or less similar to momo, except for the fillings and shape (which is more like Yomari of the Newars). It is quite popular dish among the Madhesi people in the Terai area of Nepal.

The process of making Bagiya is given below:

Water as required (for cooking) 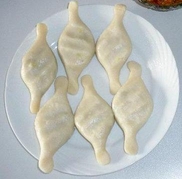 First of all, take a big mixing bowl and out rice flour in it. Then, add boiling water as required and knead it into dough. Now, put the daal for boiling and let it boil until the water evaporates.

Take a blender and put salt, turmeric, masala, garlic, ginger, coriander leaves and make it into a paste (or powder). Add the mixture to the boiled daal and mix it all thoroughly using some oil.

Now, take the dough and make small dough balls out of it. Form a cup like structure with the dough and fill the spice mixture in it. Then give it the shape of the Bagiya which is usually oval with one side having pointed end (like Yomari).

Lastly, take a cooking pan and put water to boil. When the water starts boiling, add the bagiyas in it. Do not add all at once, rather add 2 – 3 depending upon the size of the pan (so that the bagiyas do not touch each other). Cook it for about twenty five minutes and repeat the process until all the bagiyas are done. The take them out of water and arrange then in a nanglo (bamboo platters used in kitchens). Your bagiyas are ready to be served with your favorite achar.

You can also heat the remaining bagiyas on a pan using some cooking oil, the next day and serve it with tomato achar.