The festival of Rishi Panchami is related with the worship of the Sapta Rishi (seven powerful saints in Hindu religion). It is a Vrat (fast) observed by females on the fifth day of the waxing moon fortnight of the Bhadrapada month (August-September). It falls on the third day of the Haritalika Teej. This is observed by married as well as unmarried women and girls who have reached their menstruation period. 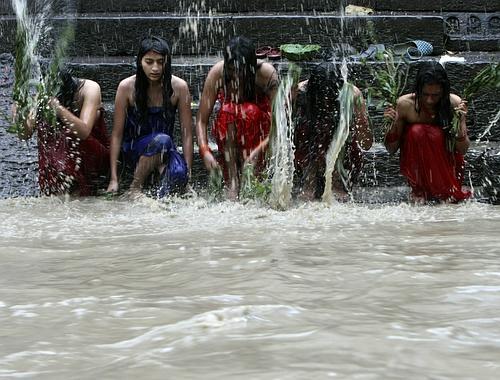 The menstruation period is believed to be impure and women and girls are not allowed to cook, touch or participate in any religious practices or come in contact with any family members, especially males, during their periods. This fast in taken in order to seek forgiveness from the saints for any mistakes committed during the menstruation period. The main feature of the day is the ritual bath.

On this day, women wake up early before the sunrises and take the ritual bath with particular types of mud, mud from the elephant’s foot, from the Tulasi root and from the Amala root. They brush their teeth with Datiwan stem (herbal plant) and offer the leaves from the same plant during the worship. They make the images of the seven saints using the cow dung and worship it. The seven saints or the Sapta Rishi are Vashishta, Kasyapa, Atri, Bharadvaja, Vishwamitra, Gautama and Jamadagni. It was believed that the spirits of these sages inhabited the constellation Ursa Major, the seven brightest stars of the north (The Great Bear).

As the legend goes, there was a king called Sitasale who asked Brahma to advise him about a fast that can free one from all the sins of past lives. Brahma narrated him a story of Brahmana called Uttank whose daughter was widowed a few months after her marriage, was badly bitten by worms and experienced other great sufferings. Brahmanas meditated in order to discover the cause of the daughter’s sufferings. They came to know that the daughter had made offences in her previous life by entering the kitchen on the day of menstruation. After realizing this, the daughter observed the Rishi Panchami Vrat and purified herself.

The fast is strictly observed in this day. Most of the women used to eat fruit or root vegetables only, however, nowadays, they eat rice and curry after the worship is completed. This is one of the very strict and tuff fasts. Many women these days do not take the menstruation taboo seriously which is a reason for Rishi Panchami Vrat being unpopular these days. Whatever be the case, Rishi Panchami is still strictly followed in the rural and town areas of Nepal. This fast is observed by women to seek forgiveness for the mistakes committed during their menstruation period.