Sold is a story of a woman, more precisely a small girl, who was sold to a foreign land. The book by Patricia McCormick touches deep into the context where girls and women are trafficked from various parts of Nepal to India where they are sold to the brothels. The novel published in 2006 tells the story of a small village girl Laxmi from Nepal who is sold as a sexual slave in India. The story is written in series of short chapters that explains the point of view of the main character.

The story starts with the description of the 13 year old girl Laxmi who lives in a small hut in the mountain village of Nepal. Her family, even though is desperately poor, she is happy in her own little world. However, after the tragic Himalayan monsoon washes away all their crops, her step-father forces her to leave the house and look for a job to support the family. He takes her to a glamorous stranger who promises her of good job in the city. The girl, hopeful of her dreams, follows him to India where, to her dismay, she finds out she has been sold to a brothel. Her life is miserable there but she still survives remembering her mother’s words. She eventually makes friends with other girls there and finds happiness amidst the darkest hours in the worst place on earth. 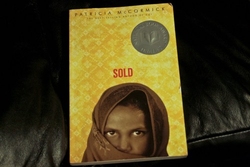 The book wonderfully describes the state of girls in Nepal, especially the vulnerability of the girls in the rural areas of Nepal. They are sold to a foreign land where they are treated like animals, or worst, merely a toy for entertainment and fun. The book not only explains the hardships of the girls who are sold but also how they happened to get trapped into the wrong hands. It gives a picture of the cruel and harsh world, especially to those readers who live in safety and under protection of the law.