The Teechi Festival in Upper Mustang

Try something different during your holidays. Go watch the indigenous people of the Upper Mustang Region in Lo-Manthang celebrate the Teechi and participate in the fun!

The word ‘Teechi’ (often pronounced ‘Teeji’) is an abbreviation for the term ‘Tempa Chirim’. This translates to ‘Prayer for World Peace’. The festival commemorates the victory of Dojee Sonnu, an incarnation of Lord Buddha, over a demon Man Tam Ru. Man Tam Ru is a ferocious creature who feeds on humans and animals. He also causes misery and havoc through droughts and storms. 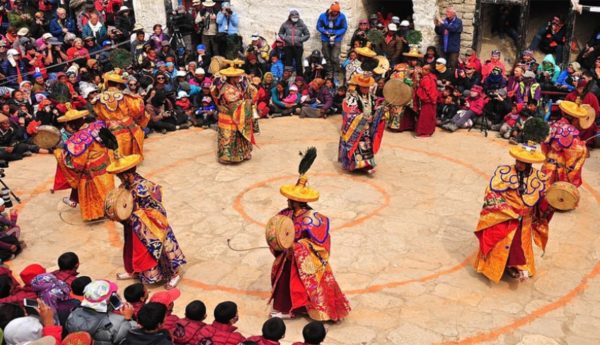 The Teechi festival takes place during the last week of May. The festival generally lasts for three days.  There are about 65 monks in total living in Lo Manthang’s Choedhe Monastery. They all take part in the performance. The monks put on bright and colorful displays as they perform a series of intricate dances. On the first day, the Tsa Chham dance potrays the harassments of Man Tam Ru. On the second day, the birth of Dorjee Sonnu as the demon’s son is shown through the dance called Nga Chham. On the third and final day, the attempt to return the demon to the spirit kingdom inhabited by Buddha is shown through a dance.

The entire festival of Teechi is energetic and well-organized. It is interesting, bright and colorful. It is a festival that will stay with you for a lifetime.