The pride of the nation, the national identity – a flag – holds significant place in the heart of a nation and its citizens. The flag is the symbol or the identity of the country that represents it to the world. Every nation has it’s own distinct flag. The Nepali flag, however, is unique not only in design but also in its shape.

Unlike the flags of the other countries, the Nepali flag is the only flag in the world that is not quadrilateral in shape. It is a simple combination of two triangles. The flag not only identifies the nation but its design also interprets the nature of Nepal and Nepalese. 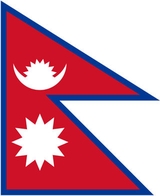 The crimson red color of the flag is the color of rhododendron, country’s national flower. It also symbolizes the victory in war by the great warriors of Nepal. The blue border symbolizes the peace in the country. The crescent moon and the sun on the upper and the lower triangle of the body have their own definitions. The moon represents the calm nature of the Nepalese while the sun represents their aggression. The moon also symbolizes the cool of the Himalayas while the sun represents the heat of the Terai. The two celestial bodies also represent permanence that Nepal will last as long as the moon and the sun last in the universe. The two triangles represent the Himalayas and mountains of Nepal and also the two major religions that prevailed in Nepal (Hinduism and Buddhism).

The celestial bodies in the flag had human faces that were removed to modernize the flag in 1962. The flag was adopted in 16 December, 1962, with the formation of new constitutional government. The new flag was designed in the same manner like the old one that lasted for many centuries.

Hence, the uniqueness of the Nepali flag lies not only in its design or interpretation but its shape. Also the color, shape and the elements of the flag tell a lot about the country and its citizens.