A Place for Pilgrimage and True Love

Budha Subba is one of the most popular destinations in eastern Nepal. It is an ancient Kiranti shrine on the Bijaypur hill in Dharan. It is a pilgrimage for devotees as well as true lovers.

Historian Iman Singh Chemjong says that Bijaypur was the capital city of the Kiranti kingdom, during and after the reign of King Bijaynarayan Rai. Other historians argue that Bijaypur was named after the Sen King, Bijay Sen when he won the village during his expansion campaign. At present, this place is known as Limbuwan. The temple welcomes many visitors every year. Not only the Kirants but also the Hindu pilgrims visit there. Besides the pilgrims, the number of young couple visiting there with the wish of being together forever is very high. 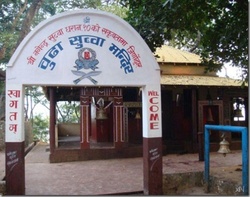 There are many controversial legends surrounding this temple. According to one legend, a Kiranti hunter Budha Subba and his sister Subbini used to play and hunt on the hill with a slingshot. One day, they accidently hit the tip of a bamboo tree instead of a crow they were aiming for. From that day, the tip of the bamboo tree never grew back.. Hence, Budha Subba gave up hunting, buried his slingshot and started meditation. It is the same spot where the temple stands today and the small mound of mud is believed to be the spot where he meditated. According to this legend, the temple got its name from the hunter.

The interesting thing is, even today, the bamboo trees in Bijaypur hill do not have a tip and also, not a single crow could be found in the area, despite the occasional picnickers and the offerings in the temple.

However, another legend say that it is a tomb of the last Limbu king, Buddhi Karnaraya Khebang who was executed by the Gorkhas during the invasion by Prithvi Narayan Shah in 1775. The Limbu King’s soul was believed to have wandered in the area where his tomb is located. The locals believed the spirit was friendly and helpful so they started to worship it. In Limbu language Subba or Hang means ‘King’. This legend is backed by some historians who claim it to be the tomb of the last Limbu king.

Besides being the pilgrimage, the temple also holds a significant place in the life of true lovers. The place observes many young couples writing their name together on the bamboo poles, as the legends says that the couples, who write their names on the bamboos here, will be together forever. However, due to the danger of untimely death of the bamboo trees, the couples are not allowed to carve their names anymore. Instead, they tie the colorful sacred threads on the fence as tying the threads is believed to make your wish come true and also unite you with you true love.

Hence, the temple not only hold special place in the Kiranti religion but also in the life of the Hindus and young couple. The temple at the distance of about 1km from Dharan bus stop is the ideal place for wishing for your true love and healthy life.