Mustang district in far western Nepal is popular for apples and products made of apple. Although the production of apple is very high in the region, lack of proper transportation facilities make it difficult to sell it in the Nepali market. It is an irony that Nepal has to import apples from China and India while the apples in Mustang and other district like Humla and Jumla are rotting at the road side.

Almost every house in Mustang has an apple tree or apple garden just the way there are tea gardens in Ilam in Eastern Nepal. But this sad reality that Nepal needs to import apples from neighboring countries while it could export it to them has shown the harsh situation of transportation and losses because of lack of this facility. However, the people of Mustang have found new ways to utilize their apple production and earn their livelihood even if they could not sell the fruits in other parts of the country. 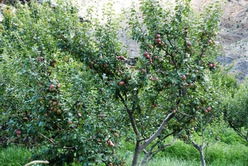 They make most use of the apples they produce. They use apples to make apple pie which is commonly used as cakes during occasion and celebrations. Those tasty pies are unique to others and a tradition for the locals. Another way of utilizing apples is making alcohol from it. The apple wine (and juice) branded as Marpha drink is a production of Mustang district as a way of utilizing the apples in their gardens. The production and sale of this drink has not only utilized the otherwise wasted apples but has also improved the living standard of the people giving them another source of subsistence.

The other way of utilizing these apples is to sundry it and makes sukuti or titauras. For that purpose, the apples are peeled and when all of its cover is removed, then the middle portion of the apple is cut out (using a special machine they have for removing the portion that contains the seeds). When it is removed, the apples are cut into thin slices from the sides so that it resembles a ring or bangle made of apple. These rings are then put into a long stick or thread and are left to sundry. When done, these are stored or are mixed with spices (cumin powder, salt and chili powder) before storing and consumed as titauras.