Buddha’s Orphans (2010) is the second novel by author Samrat Upadhyay. It tells the story of an orphan boy Raja and the privileged girl he is fated to love, Nilu. The novel uses the political upheavals of Nepal as the backdrop and this multi-generational, multi-layered novel also has a love story in it. It revolves around the lives of Raja and Nilu and although Raja seems to be the protagonist at the beginning, it is seen that Nilu is the one tying the threads together as the story progresses. 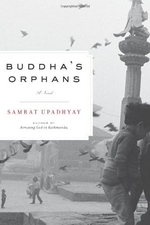 Buddha’s Orphans, published by Houghton Mifflin in 2010 and it is the fourth book and second novel by the writer. The book describes the story of Raja and Nilu, both of them coming from different social and economic backgrounds. The book starts with a woman coming to Tundikhel, leaving her child there and heading towards Rani Pokhari where she commits suicide by drowning. The child comes in the refuge of an old man named Boke ba who lives inside Tundikhel. Unknown with what to do, he hands over the child to Kaki, who starts caring for the child and as a result, is kicked out of the house by her son and daughter-in-law. Hence, begins Kaki’s struggle at for raising the kid. Just as they start to look for a house to live in, a man finds her one day while she is selling her corns and offers her a job at his home. He cares for Raja as his own son and everything seems to be good, just for a while as Raja grows attached to Jamuna mummy, man’s wife who is a little psychotic. Fearing that she might lose Raja, Kaki runs away with him without letting anyone know. She finds a job at a house with lower pay and no school for Raja, unlike she had in the man’s house. Even so, she accepts the job and this is where Raja meets Nilu for the first time. Raja, one day, however, finds his way towards Jamuna mummy’s house leaving Kaki behind. He is then adopted by the man and his wife.

After few years, curious Nilu makes her way towards the area where she had heard Raja lived and when she finds him, cold say nothing at first. Due to some ideological problems at her school, she leaves it and joins the government school to study with Raja. This is how their love starts to blossom and fearing that their contrast and misbalanced family might come in between, they elope just as they have nearly completed their college. The story moves to next generation with the introduction of their children and the fate they are to face. The story of Raja’s mother, which had remained mystery in the first part, comes out in the second part and it is further explained by the situation his daughter passes through.

The book is a wonderful work of Samrat Upadhayay and although might seem to be confusing at some point, it is a good read. The book was also translated into German and Czech language.