Cucumber, locally called Kakra is considered to be good for health. It is also good for keeping you cool during the summer and its juice is refreshing as well. Cucumber is not only eaten raw or with salad but one can also make spicy pickles out of it. Among the various types of cucumber pickles, the recipe of one is written below. 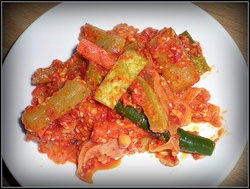 First of all, take a large bowl and out the cucumber slices into it. Mix it with salt and leave it for at least two hours to extract water from cucumber. After it releases the water, drain it and keep the cucumber aside. Next, take a pan and dry-roast sesame, cumin and coriander seeds until they are toasted. Now, use a blender and mix all the toasted seeds along with timur, chili, tamarind and garlic paste, oil, black pepper, asafetida and salt to form a thick pickle paste. Pour the mixture into the cucumber slices and mix thoroughly. Sprinkle chopped cilantro over the pickle for garnish. Your Cucumber Achar is ready to serve with rice, roti or other snacks. You can also refrigerate it in a sterilized jar.