Kalikot is one of the districts in far western region in Nepal. Situated in Karnali Zone, it is a backward district in the field of development, education, transportation and other development infrastructures but is very rich in terms of natural resources. The district can be accessed by the bus from the Surkhet that runs along the Karnali Highway which is considered as the most dangerous pathway of Nepal for transportation. Despite the risks, however, the people living here are compelled to travel through the dangerous highway.

It is a mountain district with steep hills and mountains making it difficult to construct the roads which has resulted in trekking being the main form of transportation to the district. People living there are deprived of good roads and they walk to reach their destinations which has created problems to many people in terms of drinking facilities, health facilities, transportation facilities, etc. Also, the health sectors are affected due to the lack of transportation facilities. The district also lacks in terms of electricity supply to many of its villages resulting naturally in no communication or other services. The people living here have a difficult life, struggling for the basic necessities/facilities which are often taken for granted in other parts of the country as well as the world. 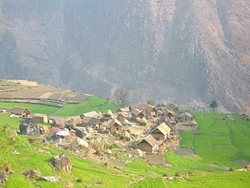 The place is rich in terms of natural resources although it lacks in terms of modern development facilities. It contains many herbs that have high medicinal use and importance such as Yarshagumba, Jatamashi, Panchaule, etc. Many tributary rivers of Karnali also flows through the district among which Tila River is the main tributary that accommodates many species of fish including Asla. Snowfall occurs during the winter and a lot of people come here to enjoy it and play with the snow during winters. The hills are deeply covered with white snow which adds more beauty to the place. Besides that, it also has many waterfalls, breathtaking views, many beautiful birds including Danphe, Rhododendron forest, etc. which adds up to the beauty of the place demanding at least a visit from the tourists, national and international alike.

Kalikot, though a backward district in terms of infrastructures, still remains as one of most beautiful places in Nepal where one have trekking experience to Rara Lake and enjoy the breathtaking sceneries throughout the way.